Earlier this year a customer contacted ACI to evaluate how best to gain additional capacity from an existing Clark CM2 compressor they had in operation. In summary, they needed to increase the bore diameter of the cylinder that was being used. The challenge was the cylinder they had was not capable of being bored out due to working pressure limitations. We had offered a new cylinder using our standard delivery of 26 weeks to cover the engineering, pattern, casting, machining and testing process as the new cylinder would have been a cast nodular iron cylinder. However, the 26 weeks would not support the shutdown that was planned for June. The challenge in front of ACI was to reduce our lead time from 26 weeks to 10 weeks. Can we do it? Yes, we can.

How do we reduce our pattern and casting lead time? Do we machine from a forging? Is there another material. The forging lead time was over 12 weeks. So a forging would not work, therefore we had to find an alternative material, enter in Dura-Bar. We first looked at and used DuraBar for another cylinder application and upon engineering review, we determined it could work for this cylinder, provided we could design it as non-cooled. The following photo is the DuraBar bar stock the cylinder started as: 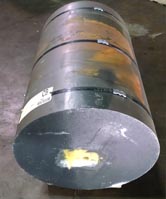 So we just have to take this ~8,000 pound piece of bar stock and make it into a cylinder body, about ~3,500 pounds later it started to look like a cylinder body: 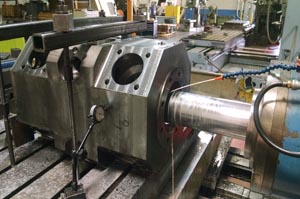 During the machining, another challenge that developed during the project was the fact they wanted to increase the bore much further than our initial review as they were predicting the operating conditions to change again in a few years. Therefore they requested us to make the cylinder even larger than we had originally designed. It is difficult to finalize machining plans when the scope changes…

But, we recognize these dynamics and work as a team to keep the project moving while some of the details still get worked out.

Here is a photo of the cylinder in the Hydrotest booth: 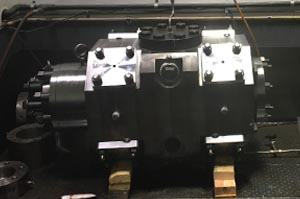 From a piece of round bar stock to a final product ready to ship: 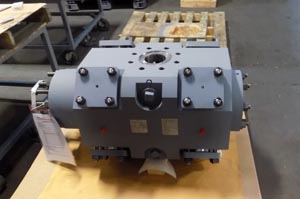 I am proud to state, we shipped this cylinder on June 15th, only 8 weeks after we received an order. This was no small task! In 8 weeks we designed a cylinder (and components), procured material, machined a large round piece of steel, tested, painted, and shipped.